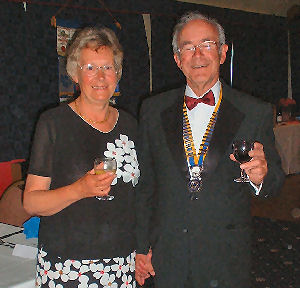 The evening was most enjoyable (once we had managed to find out how the microphone worked). We experienced delightfully melodious music by 'Le Jazz' whose leader turned out to be a former member of the Guildford Philharmonic Orchestra during Dennis’s time at Guildford.  We were privileged to have representatives from seven other Rotary Clubs and to be graced with the presence of so many of the District hierarchy. The President-Elect composed a fitting poetic tribute to our out-going President. 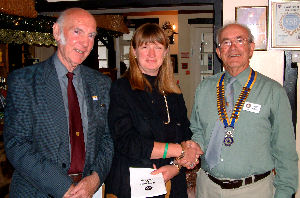 Frances Chanter was inducted into club membership at our meeting on May 10th. She is shown here with her proposer, President-Elect Dennis Aslin, and the President, Alan Osborne.

Frances will contribute much to the club, especially in the field of international aid - she has been a frequent visitor to Sri Lanka and has already been responsible for aid reaching that country after the tsunami - see the fishing boat below. 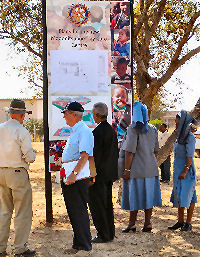 This project to help the 300 orphans of AIDS is in Botswana – one of our members has a personal link to the Rotary Club of Gaborone. The 'ground breaking' event took place in August 2004, and here we see the plans for the new building being studied at that event.

Our club contributed to the funding for this project. 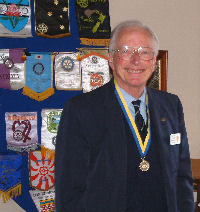 A second Paul Harris Fellowship, the highest award which can be made by Rotary International, has been given to Bill Airey at a lunchtime meeting on April 19th. attended by members and guests.

Bill is retiring from our club at the end of the month. he has been a Rotarian for longer than anyone can remember, has served in three clubs, and been President of two of them including Exmoor. He has made an outstanding contribution to Rotary fellowship. 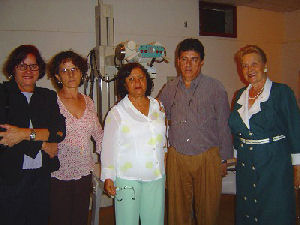 A good example of 'matching grants' funding - the Rotary Club of Exmoor with Tiverton and Exe Valley clubs raised $2000 which was boosted by a matching grant, and added to funding from the local Rotary Club and District in Brazil - the result was that at Alto Pareiso where they had no x-ray equipment and patients had to travel very long distances, we were able to supply brand new x-ray equipment for $12,000. The whole project was achieved in less than 6 months. 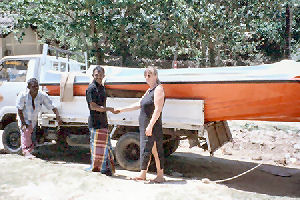 Following the tsunami in S.E. Asia, £6,000 was raised in the Exmoor area by Frances Chanter - a £500 donation was given to her by the Rotary Club of Exmoor. She has been to visit Sri Lanka many times - this time she went armed with pencils and notebooks to help supply the schools. 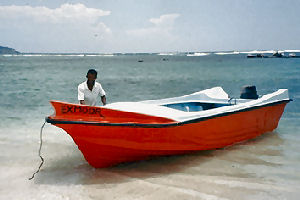 Here she is seen handing over a boat to the local fishermen - these 19 foot fibre-glass boats are made locally in Sri Lanka and the new owner has named the boat 'Exmoor' as thanks to those who generously provided the money.

It is planned that our Rotary club will keep in touch in the future with this area of Sri Lanka via Frances, and hopefully to offer on-going aid in the rebuilding of the stricken parts of the coastline.

For the third year in succession, Rotary clubs across the country held a Stroke Awareness Day on April 9th in association with the Stroke Association. People were encouraged to come and have their blood pressure taken, painlessly and free of charge.

Here the President of the Exmoor club has his blood pressure checked (it was OK!). Approximately 120 people had checks, and two of them had sufficiently high readings to merit concern, and were referred for further investigation by their doctors. 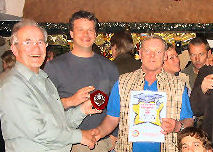 A new venture for our club - we took part in a District pub quiz to raise money for Africa Hope. In Bampton, four establishments took part and competed for 'Brainiest Pub in Bampton' - won by the Swan, seen here collecting the trophy from the President.

The event was such a success that it is likely there will be more quiz nights to follow. 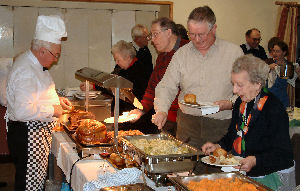 This remarkable event took place in Bampton Public Hall as a fund-raising event for victims of the tsunami. Tickets were sold out to capacity, and a splendid occasion was organised by the club, especially our two members who were the chefs - soup, a carvery with roast pork and roast beef, and a delicious range of puddings, followed by coffee. Everyone had a really enjoyable time, and because all the food and wine was donated free, we raised from our tickets and a raffle (again where all the prizes were donated) a sum of £1938. Some pictures here. 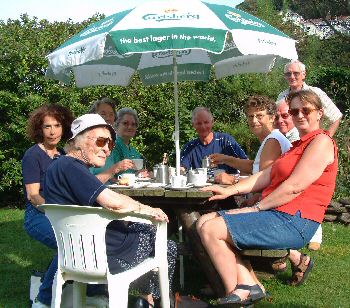 On September 9th, 53 senior citizens from Bampton, Dulverton, and Brushford were taken on a coach trip to Lynmouth, "where Exmoor meets the sea". They were accompanied by nine members of the club and helpers - some are shown here enjoying a lovely cream tea in the garden of Rock House.

We were blessed with sunshine, and the trip was much enjoyed by all. 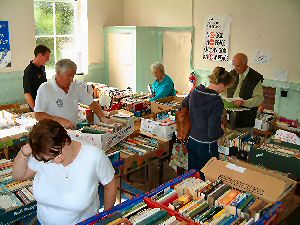 The Club organises sales of second-hand books at events both in Dulverton and Bampton. Recently, during the August bank holiday weekend, we raised £275 by selling a considerable number of books (at 25p each!) from our very large selection.

We do appreciate the donation of books which we can sell to help our various charities.

The Club is proud to announce that it has awarded its first ever Paul Harris Fellowship, the top Rotary International award named after the man who founded Rotary. 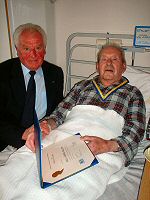 Stuart Thompson, seen here with John Rudd the President, was presented with the award whilst in hospital. We send him best wishes for a speedy recovery.

The award was greatly deserved by a man who was a founder-member of the club 25 years ago, and during his working life was well known as an Exmoor 'James Herriot' - he was a vet working from Dulverton and Bampton, and his specialty was the care of horses. He was president of the club 1988-89, held a number of club offices, was a considerable influence on the development of the club, and regularly attended the weekly meetings until his recent illness.