Club News on this page follows the main events in which the club has been involved this Rotary year - from July 2006.

New club members are like London buses - none for a while, then two come along at once! 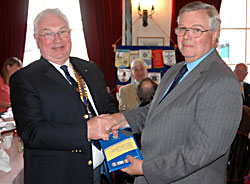 A pub quiz night was held in March to find 'Bampton's Brainiest Pub' - this is part of a larger pub quiz event run simultaneously across the whole of Devon. This time it was won by The Courtyard. The event raised £187 for charity. 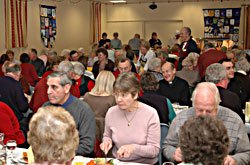 The Exmoor Rotary Community Sunday lunch - in its 3rd year - was enjoyed by 120 guests in Bampton's Public Hall on January 21st. A three-course meal was provided by the club, and all proceeds went to the Shelterbox charity. The Rotary district international chairman Jill Sloley gave a short talk on the amazing effect that the Shelterbox charity has had in many regions of the world.

A total sum of £1430 was made, which was topped up from club funds to make enough for three Shelterboxes. Many thanks to all those who took part, helped, or donated raffle prizes or contributions to the food and drink. See you next year!