Club News on this page follows the main events in which the club has been involved this Rotary year - from July 2007. 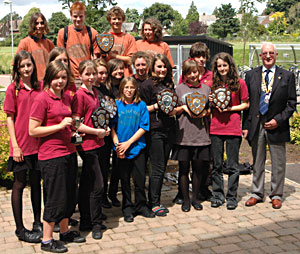 At a special ceremony at ISCA in Exeter on June 25th, no less than six presentations were made to winning teams in the Exmoor Youth Challenge. Students packed out the hall to see their friends presented with trophies for the best teams in five of the six available categories, a very remarkable achievement.

ISCA were also presented the award to the best team (out of the 115 teams who took part) achieving a near perfect score. A cup was also presented for the best fund-raiser in the college, and a cheque for almost £1800 was given to President Richard as sponsorship money, adding to the massive total to donate to Children's Hospice South West. Terrific! - we look forward to seeing them again next year.

Ironman UK at Wimbleball Lake 15th June - the club turned out in force to run a cyclists' service station in the wilds of Exmoor. Kick off was 5.45am! - in spite of which we were all bright eyed and bushy tailed by the time the competitors (all 1300 of them, with two laps of the course) reached us for water, energy bars, gels, and juice. As the lycra flashed by, we attended to their every need.

We hope to raise several thousand pounds from our participation is the event.

This time it was the three pubs in Dulverton who entered the quiz challenge which took place simultaneously at 70 locations across the county.

The results were extremely close, but the winners were The Bridge Inn team. 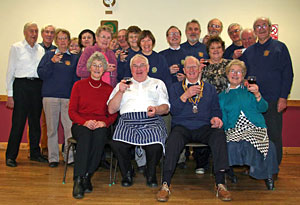 This is the fourth year the club has run this event, the first being immediately after the SE Asian tsunami disaster. We now provide an annual carvery lunch in Bampton's Riverside Hall in aid of Shelterbox.

120 guests enjoyed the lunch and the community atmosphere and a short film was shown of Shelterbox being deployed in life-saving conditions all over the world. Thanks to the generosity of those providing food and drinks and raffle prizes, £1450 was raised at this event, enough to purchase three more Shelterboxes to add to the 32 the club had already provided. The photo shows Edward and Richard and the host of helpers who made it all possible.

Waving the flag for Rotary (and the Union flag as well), the club set up its now infamous 'Whisky Galore' stall at the annual Dunster Show on August 17th. Although foot-and-mouth restrictions meant there were no cattle or sheep this year, the event was extremely well attended by the public who founds loads of entertainment as well as many bargain stalls. 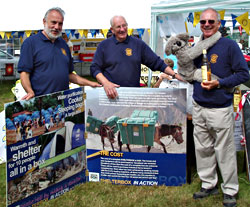 This is the second year we have joined in with Somerset Rotary clubs from Wiveliscombe, Minehead, and Quantocks, and the larger exhibition space was a big improvement. Shelterbox tent and equipment was on show, as was a Water Aid pump for children to operate enthusiastically.

Money was raised for these charities by the clubs - as well as our whiskey raffle, there was a treasure hunt and a golf game.

A good time was had by all at a club 'Aunt Sally' evening at The George in Brompton Regis. This ancient rustic game involves chucking lumps of wood at a doll on a post. Beer is drunk. You want to know what happened? 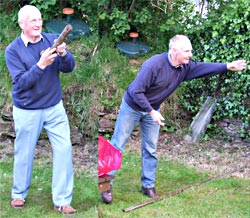 "King Richard’s Courtiers threw off and scored 1 doll. The Secretary's Scribes managed 2 dolls but the Treasurer's Cashiers took the lead with 3 dolls after the first round. Round 2 saw  King Richard’s lot and the Secretary's each add 2 dolls but the Treasurer's team added an unheard of (for us) score of 6 dolls. The final round saw the Cashiers move further ahead to win with a score of 13 dolls against 7 for the Courtiers and just 4 dolls for the Scribes. The best achievements of the evening were Tony H and John C each scoring 4 dolls, Tony H’s individual round score of 3 dolls, Heather scoring in each round (the only player to manage this) and all the Cashiers team scoring at least 1 doll."