Club News on this page follows the main events in which the club has been involved this Rotary year - from July 2009 to June 2010.

It's that time of the year again - IRONMAN UK at Wimbleball lake on Sunday 20th June. The club members along with spouses and friends turned out to run a service station for the cycling athletes near Brompton Regis. 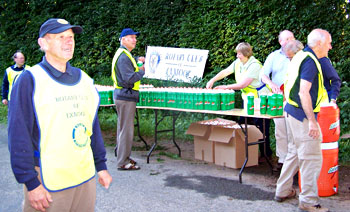 A glorious day weather-wise - but hard work for the participants! This event raises a considerable sum for charity and we are glad to do our bit in helping the organisation. 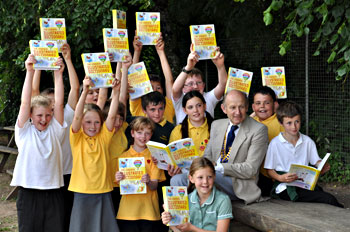 On Friday 18th June, the club visited Bolham primary school to make two lots of presentations. The winning Primary School Team from the Exmoor Youth Challenge were presented with the Seward Cup and medals.

On the right, the happy 11-year olds holding their new dictionaries, part of the Rotary national Dictionary4Life scheme, just presented by President Barney. 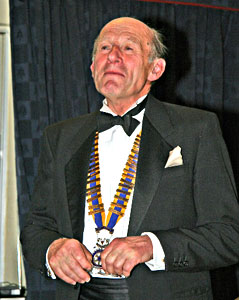 President's Night was held at the Tiverton Hotel on Friday 21st May. It was enjoyed by members of the club, spouses, and guests.

The musical entertainment was provided by 'Stick the Fiddle' who also accompanied barn dancing after the meal. 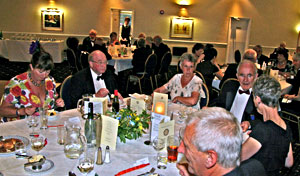 The photo above shows President Barney in a "my brother Esau was an hairy man..." moment! 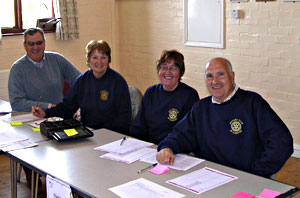 Sunday 11th April was an excellent day for walking - a lovely sunny spring day. Two hundred and thirty seven walkers turned out to take part in either the longer or shorter version - our own 1200 District (Devon) walkers were far outnumbered by the 1200 District (Somerset) participants, and at the end of the day 1200 had 207 points and 1170 had 121 points. It is hoped that the event will raise many thousand pounds in sponsorship for Children's Hospice South West. More info here.

Shown here are the 'checkout' team of John, Jo, Denise, and Terry.

Thanks for Life Day 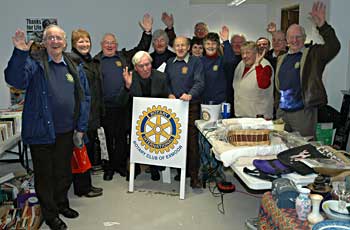 As our part of the national Rotary Thanks for Life Day, our club set up a bring-and-buy shop in the newly refurbished (and very smart) Serenger's shop in Bampton. We would like to thank the new owner for allowing us the temporary use of the premises.

Rotary Thanks for Life is the final push towards eradicating polio worldwide - Rotary has been highly involved in this for many years, and now only a few small pockets of this crippling disease remain.

Our shop attracted much interest and we raised a remarkable £435.37 for the cause - a video was run all day to show what the project is all about. 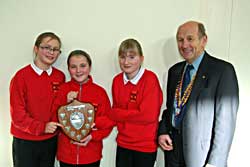 On Thursday January 28th, the club organised the annual Youth Speaks competition. In the morning, young people (under 12) from Bolham and Dulverton joined with those in Bampton for a three-way competition. It was won by Bampton, seen left holding the John Owen Trophy. Their talk was on 'Aikido'. 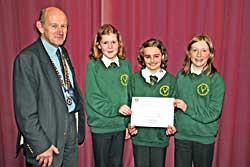 In the afternoon, at Dulverton School the Intermediate level competition took place when six teams competed from the school. The winners (right) spoke about 'How the Credit Crunch is Affecting Exmoor'. Their talk was described by the judges as exceptionally good. More on both competitions here. 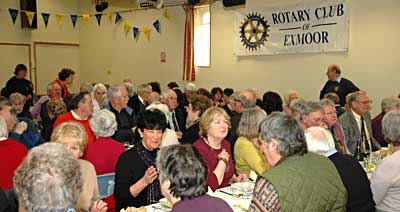 It was particularly timely coming so soon after the earthquake disaster in Haiti where aid is so desperately needed. Thanks to the generosity of those attending in giving donations and in participating in the raffle, £2213 has been raised, enough for at least 5 Shelterboxes when Gift Aid contributions are added.

This was the 6th year the event has been held the first being in 2005 immediately following the tsunami disaster. Since then the club has donated 44 shelterboxes which are in use in more than 10 different countries.

At our Council Meeting on December 1st, two new members were inducted into the club.

President Barney is seen here with on the left, Chris, and on the right, Tony. 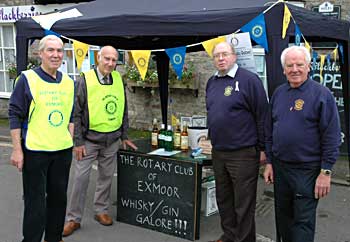 As well as the large input the club has had this time in the organisation of the Fair, another Whisky Galore stall was set up and passers-by were 'invited' to take part in a continuously-running 20-ticket lottery. The stall made approximately £300 for charity.

Details here of the whole range of activities in which we were involved.

As a result of the club's involvement in organisation, the share of the tolls which we have is £1631 which must be used for local projects within Bampton and the five parishes.

On October 20th the club was graced by a visit from the current RIBI President David Fowler (centre) and his wife Daphne. Over 50 members and guests for five other clubs came to our lunchtime meeting.

On the right are some of the 'top brass' and visiting Presidents present including our ADG Paul, and DG Jeremy.

So here we are then at the Rotary 1170 District Conference in Plymouth. Yes it was a serious conference where much of importance was communicated with regard to various charities which we support, and how our district is keeping up with Rotary ideals.

But come nightfall, it was time for an evening of merriment(!) which had a nautical theme...

And we came away with the trophy for the club with the highest attendance, relative to club size. Wow!

August Bank Holiday Monday - the annual Bampton Open Day festivities. Once again Rotary took part in two events, the all day secondhand book sale in the Riverside Hall (which raised an astonishing £416), and the Duck Race which drew a very large crowd both watching and in the water. The latter raised £675 before expenses. And all the profits made are going, appropriately, to Water Aid. 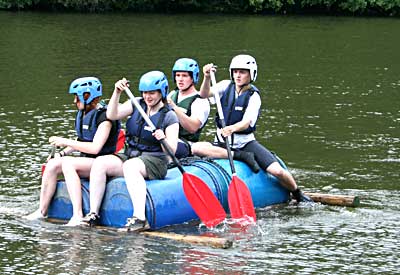 Oliver came to our club meeting in August to tell us of his experiences on Dartmoor undertaking the Rotary Youth Leadership Award. He was sponsored by the club as being a good candidate who would benefit from the experience of adventurous activities, team work, and leadership seminars. There was no doubt that he did!

Oli is second from the right on the raft.

See many more photos of the various activities here.