Club News on this page follows the main events in which the club has been involved this Rotary year - from July 2010 to June 2011. 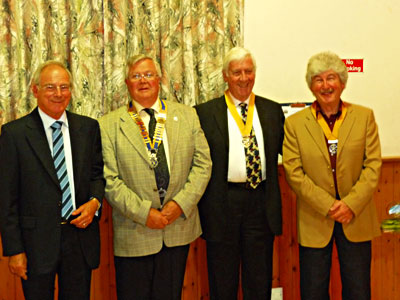 On June 25th, President's Night took place which included the Handover between Presidents, ready for the Rotary year beginning on 1st July. Shown on the right are the outgoing President Dev (breathing a sigh of relief), incoming President Alan (bouncing with ideas and enthusiasm), President-Elect Terry, and President Nominee Tony.

So congratulations to Dev for a very successful year in office, and all the best to the Club for an equally successful 2011-12. 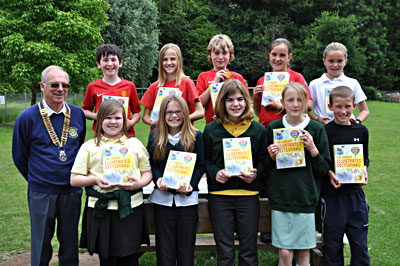 On Friday 24th June, we visited Bolham School in order to present to the Year 6 pupils (who will shortly be leaving to move on to 'big' school) Usborne Illustrated Dictionaries. This is part of the national Rotary Dictionary 4 Life scheme.

These dictionaries are specially designed for 11 year olds up to adulthood - but as was pointed out to the pupils, they were expected to wear out the books with frequent use, and when older, replace them with perhaps even bigger dictionaries!

Shown here is President Dev with the lucky recipients.

On Wednesday June 15th, President Dev presented to the Exmoor Youth Challenge Team the trophy for being the Junior Boys Runners-up.

The boys handed over their sponsorship money, a generous cheque for £344.56 to go to Children's Hospice South West. 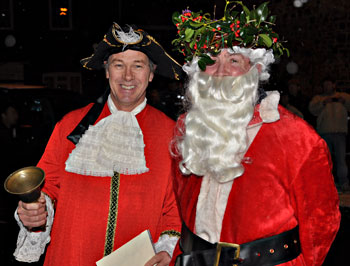 This year the annual Santa's Sleigh collections in Bampton, Dulverton, Brushford, Morebath and Shillingford took place in some pretty dreadful weather - the final session in Bampton had to be abandoned because of heavy snow!

The total amount collected in the tins was £1149.08 which was the result of very generous donations from local people and visitors. This is, not very surprisingly, quite a bit less than we managed last year, especially in view of the overall financial climate.

All the money raised will go to local charities and projects. 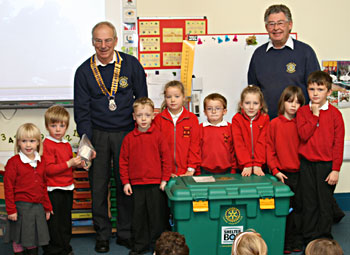 The young pupils at Bampton School have had a massive fundraising effort and have managed to raise the magnificent sum of £490.90 for a Shelterbox to help the flood victims of Pakistan. This is a remarkable achievement, the money being raised by a sponsored swim and a sponsored bike and scooter ride.

On Monday November 8th, President Dev received the money in a big bag from the children after Humphrey had done a short presentation to the classes and shown a DVD of Shelterboxes being deployed in several disaster areas of the world. Edward was also present, having organised a demonstration Shelterbox for the pupils to see first-hand.

Lots of questions were asked and Humphrey did his best to answer them! 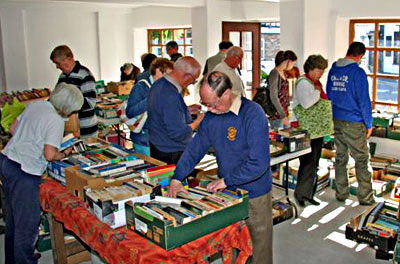 On the left the the Rotary Secondhand Bookstall which was very busy all day in Serenger's old shop in Fore Street, thanks to the kind permission of the new owner, Andrew. £276 was made - which represented quite a lot of very cheap books sold! 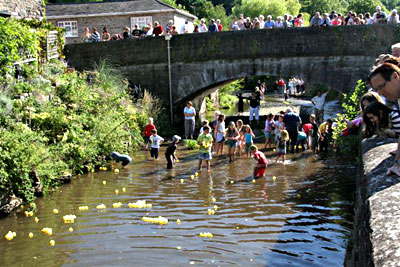 In the afternoon (and after much ticket selling!) the Duck Race took place on the river.

The Duck Race raised an amazing £697.40 after costs had been deducted.

Winner of the Local Businesses race was Brian Smith of the Bridge House Hotel.

At our meeting on August 3rd August, two new members joined the club. Anita and Peter, both from Morebath, were warmly welcomed by Vice President Alan. 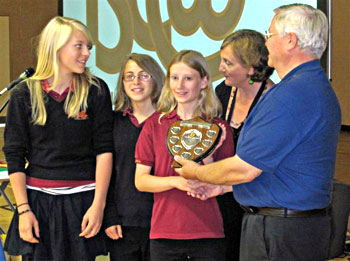 On Wednesday 21st July, Vice-President Alan visited ISCA college in Exeter to present them with the many trophies they had scooped up at this year's Rotary Exmoor Youth Challenge. Their teams had remarkably achieved the top spot in 5 of the 6 categories and two in the runners-up.

ISCA have always not only gained excellent results but have raised much money for Children's Hospice South West, the charity that this event sponsors. This year the money raised was £899.90 (where was the other 10p?!) but in a separate event undertaken by their younger pupils, a further £2000 was raised for the Hospice. Well done ISCA! 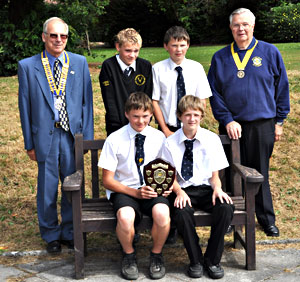 On July 6th the pupils at Dulverton School were visited by our club.

on the right we have the runners-up in the Exmoor Youth Challenge with their well-earned trophy.

Below are the pupils of Year 6 who had just been presented with their 'Dictionaries 4 Life' At the back are President Dev and President-Elect Alan. 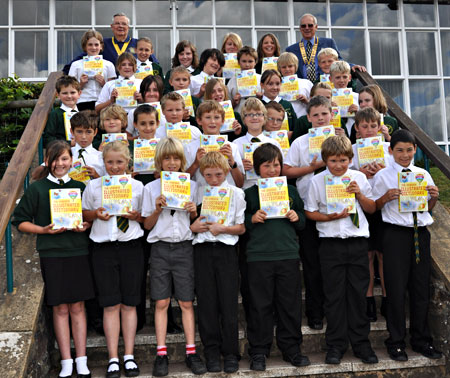