Club News on this page follows the main events in which the club has been involved this Rotary year - from July 2012 to June 2013. 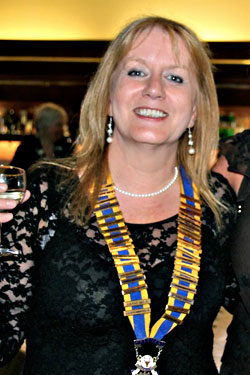 After an excellent meal with club members, guests, and representatives of four other clubs attending, Terry outlined the success of the Club during the past year.

He then passed the President's chain of office (some would say Regalia) to our first lady President Gillie. 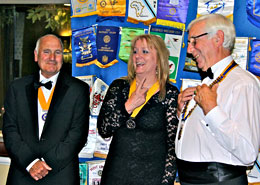 Shown also is Terry Ross, lined up as President-Elect for the following year. After the formalities, Red Hot Steel provided the lively music. 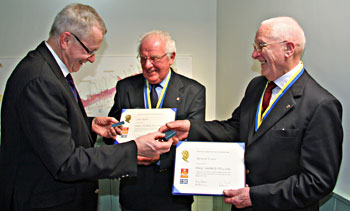 Prestigious Paul Harris Fellowships were awarded to two members of the club following many years of service and special contributions to the Exmoor Club and other previous club roles.

Seen here presenting the awards is Past District Governor Paul Edwards, with recipients John Rudd and Richard Evans. As well as medals they received printed citations and badges. 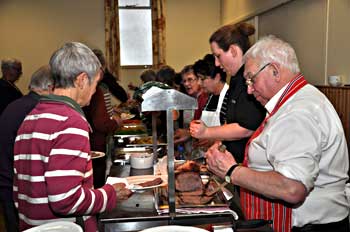 For the 90th year since the Tsunami, the Club has run a Community Sunday Lunch in aid of Shelterbox. The meal is cooked and served by members, families, and friends, and this year it was enjoyed by about 140 people.

The event raised £1520 which is almost enough for three Shelterboxes. So far, the Exmoor Club has raised funding for 65 boxes in all, sent to all over the world.

The annual collections for charity made by Exmoor Rotary cover a large area - Bampton and Dulverton, and Morebath and Shillingford.

This raised £1398 in the pre-Christmas period, thanks to the generosity of local people.

This year the 'Santa Sleigh' has a new and even more powerful sound system, so the festive music is hard to miss! 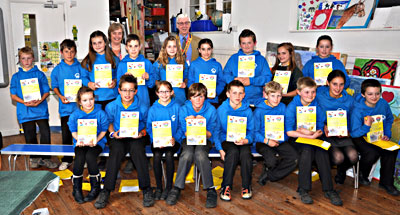 We were privileged to be asked to attend the school's final assembly of the year when they were saying farewell to the leavers. President Terry gave each Y6 pupil an inscribed illustrated dictionary.

Many of the pupils spoke movingly about their appreciation of taking part in the Rotary Exmoor Challenge, and also in Youth Speaks. 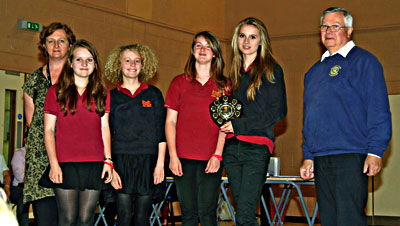 No fewer than 7 trophies for Rotary Exmoor Youth Challenge were presented at ISCA in Exeter by Past President Alan Woolley.

A sponsorship cheque for £516 was handed over by the Head Teacher - shown here with the Junior Girls Winners: Ann, Martha, Marisa, and Emily. 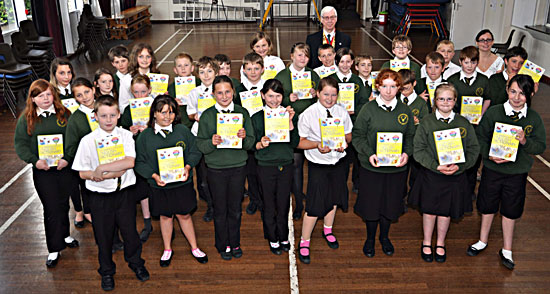