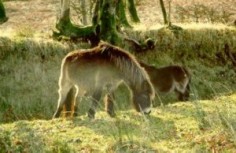 Exmoor crosses the county boundaries of Somerset and Devon in the south-west of England. It is one of the smaller National Parks and is popular for country pursuits, walking, riding, hunting, fishing, and shooting. It is an ideal spot for holiday makers looking for breaks away from it all. Agriculture is mainly sheep farming though some arable land is mixed in.

On Exmoor itself cattle and sheep graze amongst the unique Exmoor Ponies and Red Deer.

Exmoor is bordered to the north by the Bristol Channel and small seaside resorts of Minehead & Watchet.

Exmoor is the source of many rivers, the Exe, the Barle, the Lyn and these are all fed by many other steams most of which have the origins in the wettest part of Exmoor known as The Chains.

Exmoor, of course, is Lorna Doone country. Many tourists come armed with R.D. Blackmore's famous novel to see the places named in the story.

Whilst it is all pure fiction many people hereabouts can point out where Lorna met her end at Oare Church, and the Doone Valley where the infamous Doones had their farmhouse.

Not all of Exmoor is moorland. Much of it is farm land interspersed with very attractive villages and hamlets. Most villages have friendly and hospitable pubs and many have delightful tea rooms where you can over-indulge in a Cream Tea most afternoons.

A new website with news of activities across the Exmoor area