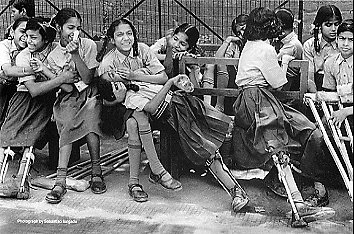 One of the biggest projects being undertaken by Rotary International is the world-wide eradication of polio, in conjunction with the World Health Organisation, UNICEF, and the US Centre for Disease Control and Prevention. It has been remarkably successful - the number of cases has been reduced by 99.8% worldwide. Exmoor Rotary regularly contributes to this fund. 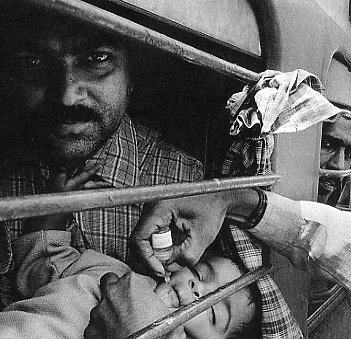 April 2012: It’s official, India has been removed from the list of polio-endemic countries. From the 125 countries in the world that were infected with polio when the Global Polio Eradication Initiative (GPEI) began, there are now only three left that have never stopped transmission. Further positive news is that the last six months have seen the lowest number of cases globally to have been recorded during this six-month period in the last ten years. That said, there is still a lot of work to be done until the world is polio free – particularly given the upsurge in cases in Nigeria and Pakistan during that same period.

At Moradabad railway station in India, each train is stopped and searched , and every child on board is polio immunised. Moradabad has the highest number of polio cases in India. About 150 million babies are born in India each year. 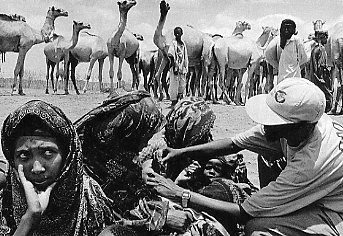 Giving the oral vaccine is a simple task and painless to the child - although you would not think so to see this mother wince! This picture was taken at Wumpul in Rumbeck district in southern Sudan.

Nomadic life can speed up the transmission of polio, so here in Aborrow in Somalia, the nomads arrive at the Jubba river to get water, and have their children immunised at the same time

These images were taken by Sebasto Salgado, and were shot to raise funds for the Global Polio Eradication Initiative.