Club News on this page follows the main events in which the club has been involved this Rotary year - from July 2015 to June 2016.

Bampton held its Springfest Day on Saturday May 14th. A large number of events spread across the town, and Exmoor Rotary held their usual Duck Race down the River Batherm in near ideal conditions. A lot of fun was had, and money was raised for local charities.

And thanks to the kids who got a bit damp whilst helping to retrieve our plastic feathered friends. 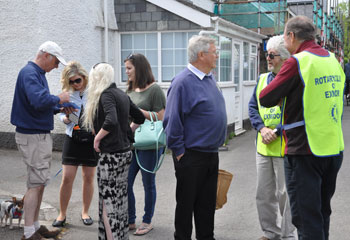 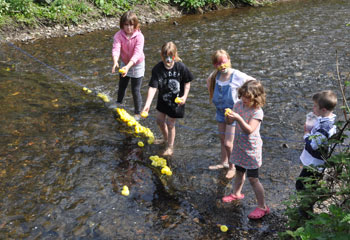 Walkers from Rotary Districts 1175 (Devon/Cornwall) and 1200 (Somerset) met on Sunday 10th April for an Exmoor walk to raise funds for Chlidren's Hospice SW and other local charities.

In all 133 walkers; Rotarians, their family members, children, friends and a number of dogs and local people all willing to take part. After egg, bacon and sausage rolls, prepared by three former Presidents, two member’s wives and a former member, the walkers started out around 0900 on one of the two walks. They had come from various places; Bude, Lyme Regis, Mendip, Yeovil, Bridgewater, Warminster and other rotary clubs.

District 1200 (Somerset, parts of West Wiltshire and West Dorset) swept the board and again walked off with the trophy. On hand, at the end, was 1200 District Governor Bob Acland to reclaim the trophy, which was presented by Exmoor’s current President David Whiteway.

On 22 March at a partners' club lunch, an exceptional event occured: no fewer than 4 club members were awarded Paul Harris Fellowships for their years spent (48 collectively) in organising our two annual Exmoor Challenges. Remarkably it was kept a secret, so it caused gobsmackedness! Many congratulations. 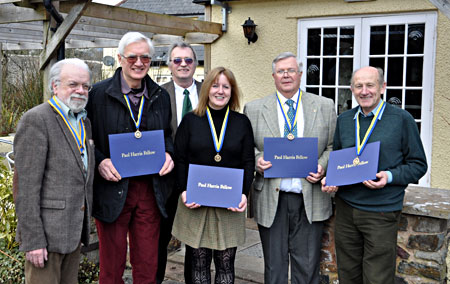 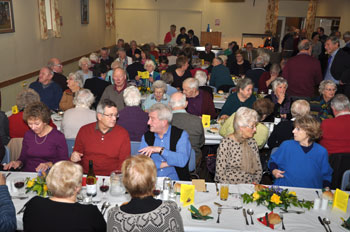 The club held its annual Community Sunday Lunch in aid of Shelterbox on 10th January in Bampton. This event has run since the SE Asian tsunami in 2004 to raise funds to help those who need shelter and basic necessities for life.

The food is cooked and served by volunteers, and a fund-raising raffle is held. This year £1800 was raised, enough for 3 Shelterboxes - many thanks to all who supported us. 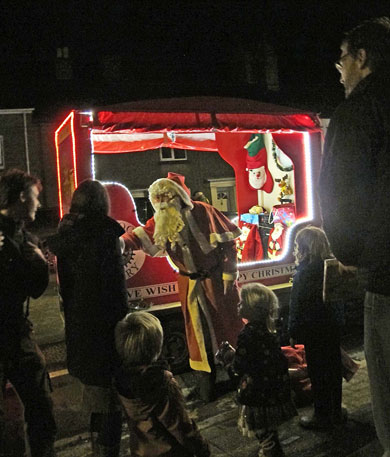 The Exmoor Rotary Santa with his sleigh has been having his annual tour of Bampton, Dulverton, Brushford, Shillingford and Morebath.

The generosity of local people means that always a substantial sum is raised for charities the club supports. This year the collections exceeded all expectations with £1246 being donated in the collection boxes, and a further £615 from Sponsorship by local businesses.
GRAND TOTAL: £1861

Shown above is Santa at the Bampton Xmas Opening evening. 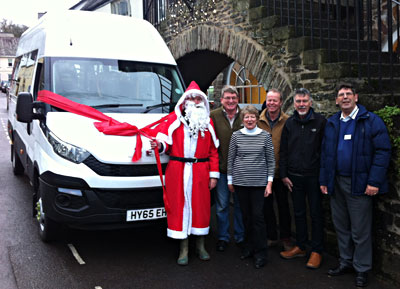 In Dulverton, Santa had an additional task to perform which was to cut the ribbon on Dulverton's new Community Minibus. 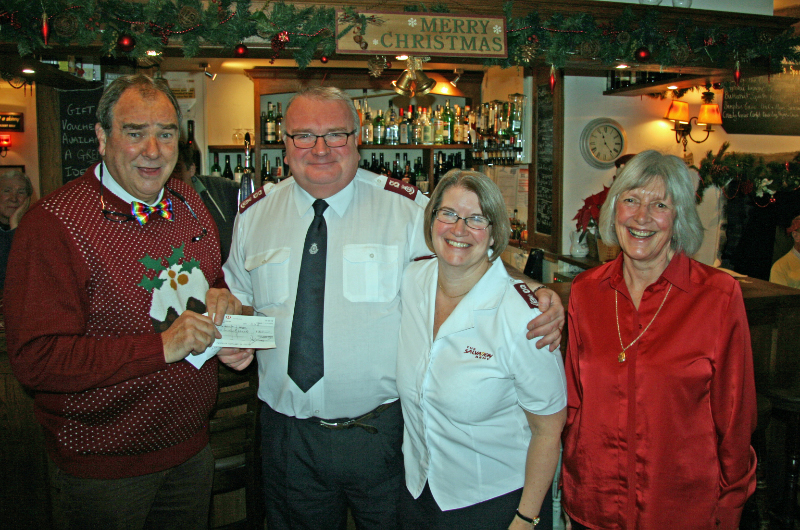 In a new departure, Exmoor Rotary held a fund-raising Rotary Breakfast at the Swan in Bampton on Tuesday 15th December. More than fifty people attended to have a Bucks Fizz followed by a magnificent Full English Breakfast. A cheque for £500 was given to Major Ian Harris of the Salvation Army towards the invaluable work they do, particularly at Christmas. Particular thanks are due to Paul & Donna of the Swan, who donated £50 to the Salvation Army and then went on to auction a three course meal and wine for two which raised over £100 for Exmoor Rotary Club funds.

A 'Rotary-up' in a Brewery! 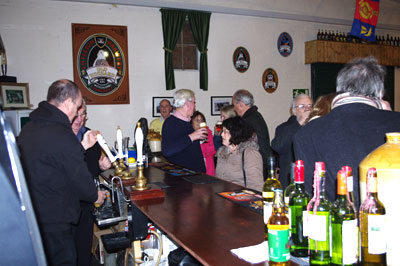 Around 16 members and partners enjoyed a memorable visit to Cotleigh Brewery Wiveliscombe where they were hosted by the owner Steve Heptinstall a great enthusiast for the art of brewing. The visit started with sampling the products at the club bar and a informative talk from Steve who started the brewery in 1979 moving to Wiveliscombe, a traditional brewing town in 1980. Here they flourished helped by a long association with the growing Weatherspoons pub chain. A delicious Curry Supper was followed by a fascinating tour of the brewery itself where we all learnt that cask brewed real ale was really a health product and not just an enjoyable drink! 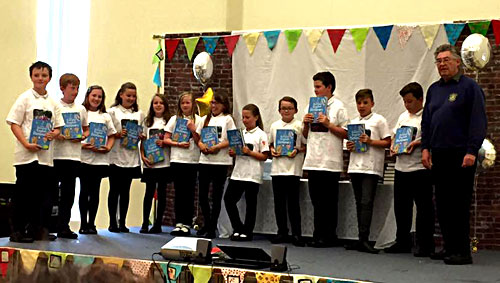 In the last assembly of the school year at Bampton, twelve pupils received their illustrated dictionaries.

Here they were presented by past-president Humphrey. 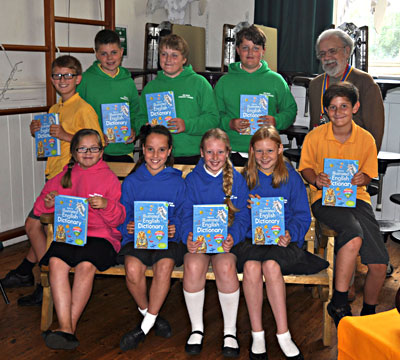 On the last day of term, 21st July, Rotary Dictionaries were presented to the leavers at Bolham School at their final assembly.

At the back is President David.