Club News on this page follows the main events in which the club has been involved this Rotary year - from July 2017 to June 2018. Do check out far more info via our Bulletins available on-line.

The annual July handover from one Presidential year to the next has taken place in two stages.

Past president Jane affixes the chain of office to Michael, and Michael welcomes the new president-elect Trevor. We look forward to another great Rotary year ahead!

Park School had both the Junior Mixed team winners, and the Overall joint winners of the 2018 Youth Challenge. They were presented with their shields on 14th June. 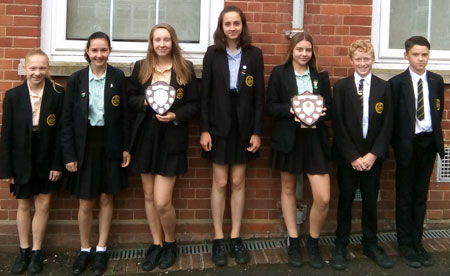 Below: Kingsmead School Team 2 won the Junior Girls shield and were one of only three teams to get around with no time penalties. 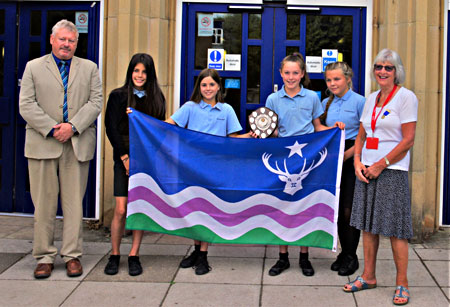 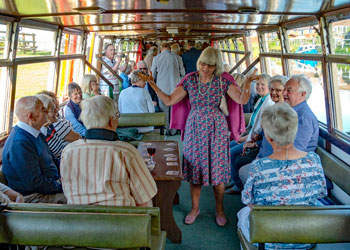 Saturday evening 2nd June saw the Club taking a trip on the horse
drawn canal barge from Tiverton Canal Basin. We were celebrating
a very successful year under the leadership of President Jane. It
was a lovely warm evening and the pace of the trip was
wonderfully slow (2½ miles per hour) with Ross, our horse, pulling
the 14 ton barge with consummate ease. 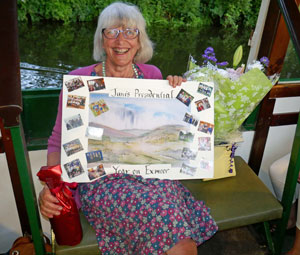 We had swans and their
cygnets, moorhens and ducks to keep us company. Our Fish &
Chips supper was delivered on the way and when we stopped to
turn the barge around to come back, there was a pleasant walk
along the tow path to see the
Brunel aqueduct. A thoroughly
good finish to a great Rotary
year. 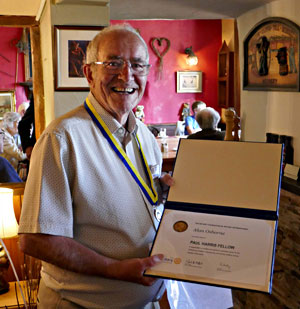 On 15th May, one of our members was presented with a prestigious Rotary award, the Paul Harris Fellowship.

Alan Orsborne has been a Rotarian for many years, and is a Past-President, as well as being involved in running youth activities and in the thankless task of claiming Gift Aid on donations.

Whatever activities the club has been running, Alan and Daphne have always been there to help! 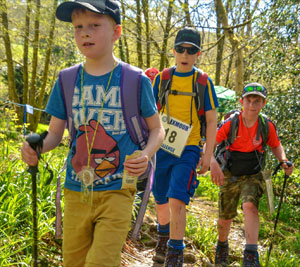 Young people aged 11 to 18 walked on a circular route of 16 miles on Exmoor, based from Dulverton Junior School.

We are delighted to say that some 484 children took part in teams of 4, and of these a remarkable 447 completed the Challenge and received their medals from Exmoor Rotary President Jane Wilson. 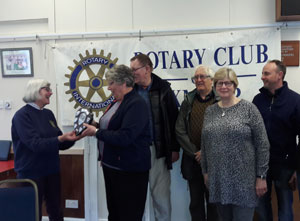 On Sunday 15 April some 103 Rotaraisn, friends, and families took part in the sponsored walks based from Oakford village hall. The weather was a bit on the damp side, but that did not curtail the hardy walkers! 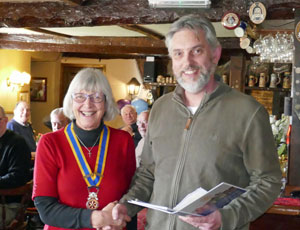 At our meeting on 13th February, Tim was inducted into the club.

He was warmly welcomed by President Jane at the George, Brompton Regis. 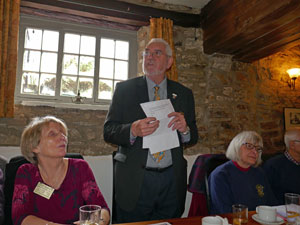 On Tuesday 6th February our meeting was graced by the presence of our District Governor George Eamer and Asst DG Diane Sheppard.

The use of the new Rotary logos was emphasised.

It was a memorable event. 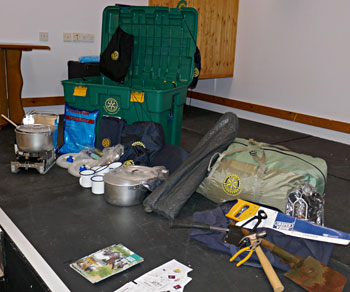 Since 2004, fund raising by Exmoor Rotary has provided almost £50,000 to provide Shelterboxes all over the world from the SE Asia Tsunami in 2003 to Syria in 2017. This annual event in Bampton has taken place every January as a community Sunday lunch with the specific purpose of donating to Shelterbox, a wonderful charity based in the south-west. 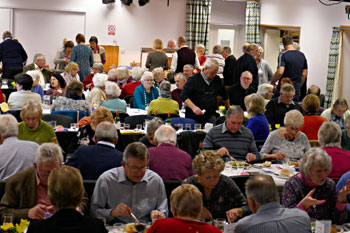 “Right now, around 85 million people around the world have been made homeless by natural disaster and conflict. We're working to change this.”
By providing emergency shelter and tools for families robbed of their homes by disaster, we're transforming despair into hope. 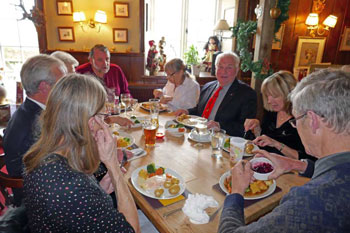 The Club also has a very healthy social life, and not only had a Christmas breakfast at the Swan, but also a full Chrstimas dinner at the George, Brompton Regis, a week later!

See here is just one of the tables of diners haveing a thoroughly good time. Happy Christmas! 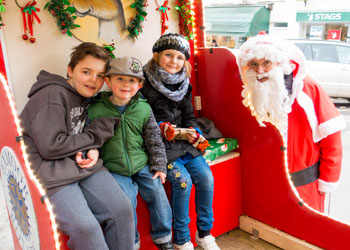 In the run-up to Christmas, our Santa Sleigh visited Dulverton, Brushford, Bampton and Shillingford to rattle tins collecting money for charity.

People were again amazingly generous and over £2000 was raised, most of which will go into local causes and projects. 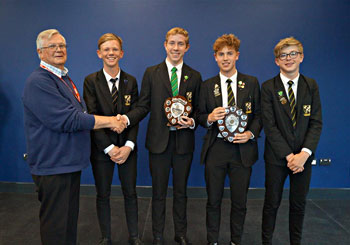 Exmoor Rotary Club organises the Exmoor Challenge every year, which is a walk where young people have to navigate unaided across a course over Exmoor. The ‘Chulmleigh Friends’ team managed to get round with zero penalty points and came in not only to be the fastest Senior Boys team but also the Best Overall Team. Alan Woolley from Exmoor Rotary Club visited the College to present the boys with their well deserved awards. Team: Sam Stuart, Tim Western, Will Stredwick, & Silas Rowe.