Club News on this page follows the main events in which the club has been involved this Rotary year - from July 2008 to June 2009.

A very special lunchtime meeting of the club took placeon 30th June, the last day of the Rotary year. Robin Brown, Rotary District Governor of Somerset (1200) came to be presented with the Exmoor Challenge trophy which Somerset had won by rather a convincing margin (see below!). 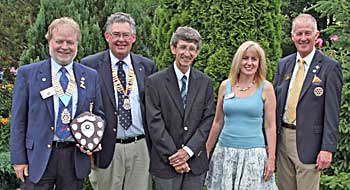 We also had Paul Curtis from Children's Hospice South West to whom we were able to present a donation of over £12,000, this having been raised from the Exmoor Challenge, the Exmoor Youth Challenge, and from our help with the organisation of Ironman UK.

As part of a new national scheme within Rotary, this year our club is donating dictionaries to Year 6 pupils (11 year olds) in three local primary schools - some 55 dictionaries in all. 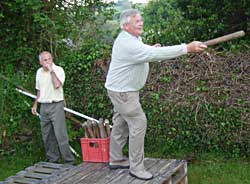 Exmoor Rotary once again brought laughter and chaos to the George Inn at Brompton Regis.
Three teams battled to win at Aunt Sally, some were lucky, others seemed to be controlled from another planet. Our future president Barney, put on a fine performance, with three strikes. Richard of Wales was having difficulty until it was suggested that he rolled up his left trouser leg before throwing - success followed, with a strike. Others aimed for the skittle and found that trees suddenly got in the way. Birds fled their nest to avoid being knocked out by flying objects. In spite of our best efforts to disrupt a beautiful tranquil evening, everyone had a great time.

Ironman UK - the 70k version at Wimbleball Lake - Sunday June 14th. Our club ran a cyclists' service station - pictured on the right - on the hill to the west of Brompton Regis.

This event raises a considerable sum for charity and this is shared by the seven Rotary clubs who help with the organisation. It can be quite exciting handing a bottle of 'Power' to the cyclists as they whiz past at high speed (or at least the front runners do!) And what a nice bunch the competitors were - very appreciative and courteous. 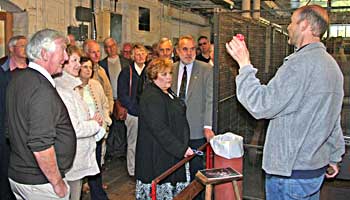 On April 28th, 36 of us went for an evening visit to Coldharbour Mill in Uffculme, a working wool mill museum

Here we were given an excellent talk and guided tour and learnt much about the working conditions over 100 years ago, and the high-tech equipment of the industrial revolution. This was followed by a very good supper together in the mill's restaurant. 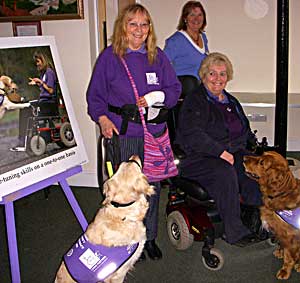 On Thursday 12th March, the club organised an event at Dulverton Town Hall to publicise the work of Canine Partners. The hall was almost filled with local people with an interest in finding out more about this astonishing charity which trains dogs to transform the lives of disabled persons.

Shown on the photo are Wendy (and Edward), Sheila (and Juneau) with Rotarian Jo who organised the event in the background. More here about Juneau and his life during 2008.

An excellent, informative, and very amusing talk was given by Malcolm Watts OBE, and afterwards the club provided a free tea with scones and home-made cakes. People were very generous with their donations and we raised approximately £240 for the charity. 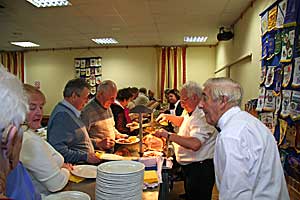 This event, the brain-child of two of our members Edward and Richard, was started following the Tsunami disaster in SE Asia. This is now the 5th year the Community Sunday Lunch has been held. Over 120 people enjoyed a 3-course carvery lunch which was prepared, set-up, served, and washed up(!) by our members and family and friends - food and wine were subsidised by various suppliers for which we are most grateful. Everyone had a good time, and there were many compliments about the quality of the food - and the company!

The very remarkable sum of over £1500 was raised, equivalent to three Shelterboxes. 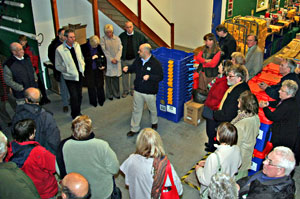 26 members of the club with partners joined up with a similar number from RC Wiveliscombe to go to Helston in Cornwall to visit the Shelterbox charity on 20th November. This turned out to be an inspirational experience for all. After a very good lunch in Helston, Shelterbox provided excellent guides and the opportunity to see this massive and hugely successful operation first-hand.

Our thanks to all at Shelterbox for giving us this opportunity (and to those at RC Wivvy for organising it). 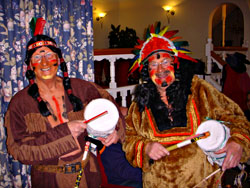 16 of us went to Weston-super-Mare for the Rotary District Conference on 14-16th November. We had a great time, and heard some really excellent talks including the Calvert Trust, Canine Partners, the Media, and Family of Rotary.

The Western-themed evening produced some fearsome cowboys and indians, and those on the left are the Little and Large of the Exmoor Club! The Gala dinner in the Wintergardens was a splendid affair even if the music was somewhat too loud for the more ancient members such as our President! 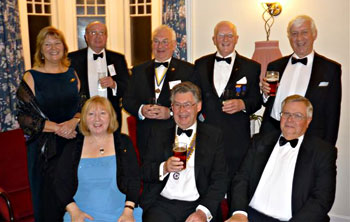 At the concluding session of the conference, we were astonished - and very pleased - to be awarded the prize for the Best Club Bulletin during the Rotary year 2007/8. Of course, we also have all our Club Bulletins available on-line here.

A very successful evening took place in Bampton and Exebridge on Thursday October 9th. Over 70 people took part in three separate locations, the Quarryman's Rest, the White Horse, and The Anchor. It was won this time by The White Horse (although scores were very close!) and £175 was raised for charity. 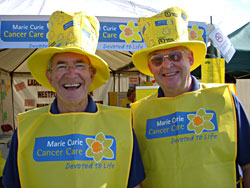 Some of our members went along to the Mid Devon Show on July 26th to help with this year's nominated charity, Marie Curie Cancer Care. It was a very hot summer's day, and we are told some 15,000 visitors attended. The hats and tabards certainly helped to attract attention! - pictured left are Alan O. and President Humphrey.

The total amount raised for this charity on the day was a whopping £2339.79. Each £20 provides an hour of free Marie Curie nursing care to terminally ill people.

Our thanks to the Bridge Inn in Dulverton for again organising a Quiz Night in aid of Rotary funds on July 24th. After sustaining ourselves with excellent home-cooked food, the quiz was enjoyed by members of our club and Dulverton residents alike. The entry fees and raffle gave us a £85 donation which will go towards our annual outing for local Senior Citizens in September.